You are here: Home » News » The benefits of drying shiitake mushrooms for your health

The benefits of drying shiitake mushrooms for your health

Shiitake mushroom is the fruiting body of the fungus Phytophthora fungus, belonging to the Basidiomycetes Agaricaceae, and is one of the world's famous edible fungi. It contains a unique fragrance substance, mushroom essence, which forms a unique mushroom fragrance, so it is called "shiitake mushroom". Due to its rich nutrition, refreshing aroma and delicious taste, it is known as "the king of mushrooms", "mushroom queen" and "the crown of vegetables". Not only is it ranked above straw mushrooms and oyster mushrooms, but it is also known as the "Queen of Plants" and is one of the "mountain treasures".

Shiitake mushroom caps are umbrella-shaped, 3-6 cm in diameter, yellowish-brown or dark-brown, with white gills, yellow stipe, and cotton wool-like white scales, which are not obvious after drying. Shiitake mushrooms have the nutritional characteristics of high protein, low fat, polysaccharide, various amino acids and multivitamins. Because shiitake mushrooms contain agaricine and trichomonal acid, which are rare in general food, the taste is particularly delicious. Shiitake mushrooms grow in winter (from the beginning of winter to the next year before Qingming). The main producing areas are in the mountains and forests of Zhejiang, Fujian, Jiangxi, Anhui and other provinces. Mushrooms are fresh and fragrant, and are excellent edible fungi. 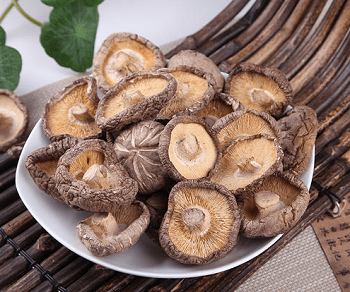 In addition to common nutrients, dried shiitake mushrooms also contain a lot of glutamic acid, a variety of vitamins and proteins, so they are called "the treasure house of vitamins". At the same time, mushroom fat contains a lot of linoleic acid, a lot of calcium, iron, copper and other hematopoietic substances. Therefore, the nutritional value of mushrooms exceeds that of all vegetables.

3. Anti-cancer and anti-cancer: The mushroom cap contains ribonucleic acid with double-stranded structure. After entering the human body, it will produce interferon with anti-cancer effect.

How to choose dried shiitake mushrooms?

①Flower mushrooms: There are cracked patterns on the mushroom caps, which are called flower mushrooms. The cracked pattern shows that more nutrients are accumulated, and the content of protein, amino acids and minerals is high, so the nutritional value of flower mushrooms is higher, and the organization is tight, the flavor is rich, and the taste is smooth and tender. The "Tianbai Flower Mushroom" with tender white mushroom flesh exposed in the cracks is one of the best. It should be noted that the pattern on the mushroom cap should be natural, large or small, deep or shallow. Otherwise, it is likely that a knife has been artificially cut on the ordinary shiitake mushroom.

②Thick mushroom: "face collapsed and tight", the flesh is thick, the cap has no pattern, it is maroon and slightly shiny; the flesh is dense, the taste is smooth, and the fragrance is strong. Thick mushrooms are best with a size of 4-6 cm, flat steamed buns or gongs rolled around the edges, and small and few wrinkles.

③Thin mushrooms: The flesh of the mushrooms is thinner, produced in late autumn, and the fragrance and taste are not as good as those of flower mushrooms and thick mushrooms. When purchasing, it is better to have less open umbrellas and less damage.

④ Ding Mushrooms: It is the "Sun mushroom" and "Qingming mushroom" in ancient books. It is the first small mushroom to sprout during the Qingming Festival. Although it is small, the quality is not bad at all, and it is the most economical and affordable. The principle of choosing diced mushrooms is "tender", the more tender the more fragrant and smooth. How do dried shiitake mushrooms look tender or not? Turn the dried diced mushrooms upside down. If no gills are visible, they are tender.

2. Look at the color: it has the unique color of shiitake mushrooms, the color is yellowish-brown or dark-brown, bright and bright is better, good mushrooms will have a little hoarfrost on the surface; the gill color is preferably light yellow to milky white, and the color is purple-red goods.

3. Smell the aroma: those with a strong and unique mushroom aroma are better; those with no aroma, or other strange and musty smells are of poor quality.

4. Dryness to the touch: The moisture content of dried shiitake mushrooms should be 11% to 13%, and the ones that are crisp and not broken are better. It can't be too dry, and the quality will be bad when you pinch it; it can't be too wet, otherwise it is not conducive to storage and easy to deteriorate.

How to store dried shiitake mushrooms?

Dried shiitake mushrooms should be stored in an airtight jar, and it is best to take them out every month and expose them to the sun once, and they can be stored for more than half a year; they can also be directly refrigerated and frozen to avoid spoilage or worms.