You are here: Home » News » Overview of northern Shaanxi jujube basics and benefits 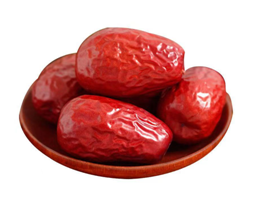 Goutou jujube belongs to the class of qi-tonifying medicines. It is said to be sweet and flat in nature and taste. It has the effects of moistening the heart and lungs, relieving cough, nourishing the five internal organs, and curing deficiency. It is very suitable to eat dog head jujube regularly to improve the poor function of the stomach and gain physical strength. Only for those who are more prone to fullness in the stomach, you should add some ginger to cook together, so as not to promote flatulence.

The most remarkable thing is that Goutou jujube contains cyclic adenosine monophosphate (camp), which can dilate coronary arteries and enhance myocardial expansion, which is consistent with Chinese medicine claiming that it has a tonic effect. When people are nervous, upset, sleep disturbed or in general menopausal syndrome, Chinese medicine prescriptions often add dog head dates, mainly because dog head dates have a sedative effect, so if life is usually stressful, you might as well add some dog head dates to the main dish soup. Food.

Goutouzao has a high content of vitamin C, and also contains cyclic adenosine phosphate and maslinic acid. After research, it has been confirmed that the above three have the effect of inhibiting cancer, which means that goutouzao has a good cancer prevention effect and is suitable for modern environment. healthy food.

How to eat dried red dates?

First, take black rice, black beans, barley, and red beans, wash them, put them in the rice cooker, then take an appropriate amount of water and pour it in. The amount of water should preferably be about 15cm higher than the rice position! Then let stand for more than 2 hours, the longer the time, the more viscous the porridge will be. 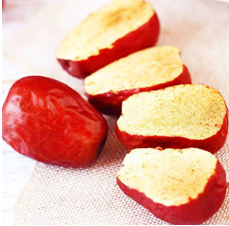 Plug in the power and start cooking porridge, add red dates, cook for about 15 minutes, add peanuts and wolfberry, continue to cook until the remaining water is slightly higher than the rice noodles 2-3cm, then turn off the power.

Keep the rice cooker in a warm state, simmer for about 15 minutes, then turn it on, and a healthy porridge is ready.

Matters needing attention: Do not put peanuts too early, otherwise there will be no crunchy feeling! Of course, you can adjust it to your own taste.

If you think about it temporarily and there is no standing material, then you need to prolong the stewing time.

Soaking in water is the easiest and most common method. Make a cup of red jujube tea every day, add some sugar, you can not only enjoy the sweetness of the tea, but also replenish iron and blood. Kill two birds with one stone. In addition, it has a good conditioning effect on people with bad spleen and stomach.

In fact, many fruits are eaten raw with the highest nutritional value and are more easily absorbed by the body. The protein of jujube is 11 times that of Sydney, and it is also rich in vitamin C. It is better to eat raw. Of course, you can't eat too much at one time, it is easy to have diarrhea and affect the stomach.

After the dried dates are pitted, they can be used to make a lot of snacks, such as red date bread, red date cookies, red date sandwiches, etc., which are very popular among women. Because not only delicious, red dates are rich in vitamin B, which can promote blood circulation and make women radiant.