You are here: Home » News » Moxa sticks and their uses

Moxa sticks and their uses

1.  It is an important medicine for gynecology:It can be used to treat menorrhagia due to deficiency and coldness,metrorrhagia and metrorrhagia,and maternal fetal leakage.The aged wormwood is processed into moxa velvet to make moxa sticks and moxa sticks.Roasting outside can dispel cold and relieve pain,and cool the leaves.Washing can cure eczema,dispel dampness and relieve itching.Wormwood has a history of preventing plague for thousands of years.Chinese herbal medicine can be obtained locally,and pharmacological research in modern medicine has shown that wormwood is a broad-spectrum antibacterial and antiviral drug.It has inhibitory and killing effects on many viruses and bacteria,has a certain preventive effect on respiratory diseases.The anti-epidemic method of wormwood fumigation is a simple and easy-to-practice anti-epidemic method.Wormwood has antibacterial and antiviral effects;asthma,antitussive and expectorant effects;hemostatic and anticoagulant effects;sedative and antiallergic effects;Wormwood has a special fragrance, which has the effect of repelling mosquitoes. 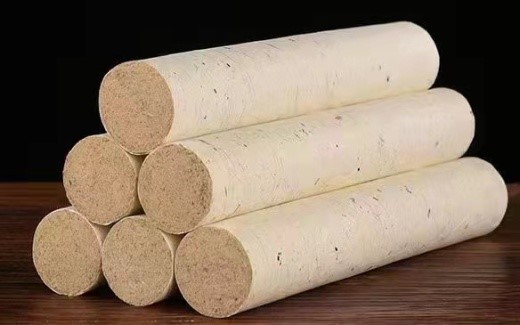 2. Efficacy of moxa sticks: can regulate qi and blood,warm the middle and dispel cold,dehumidify and relieve depression, promote muscle formation and prevent pregnancy, benefit yin qi, warm the uterus, kill roundworms, moxibustion all diseases,can pass the qi and blood of the twelve meridians,can Return to the Yuanyang that hangs down.For oral administration to treat uterine cold infertility, abdominal pain during menstruation,metrorrhagia and vaginal discharge. Moxibustion for external use can cure all kinds of diseases,strengthen Yuanyang, warm and dredge meridians,dispel wind and cold, relax tendons and activate collaterals,restore yang and rescue adversity.Can treat recurrent miscarriage and infertilityMoxa sticks are used in moxibustion, and the warm stimulation of moxa fire can reach the deep part and last for a long time, making people feel refreshed. Moxibustion can make the weakened function vigorous, and can also restrain the hyperactive function. Deficiency and cold can be nourished, stagnation can be dispelled, sick can be cured, and those without disease can be kept fit and prolong life.

3. Ai sticks help career development: Ai sticks can bring many benefits to our health, and belong to the category of general health advocated by the country and the world. With the implementation of the "Thirteenth Five-Year Plan"proposal,Healthy China has officially been upgraded to a "National Strategy". In order to open up a blue ocean of business in the big health industry, domestic enterprises have proposed the strategy of "re-entrepreneurship".This round of entrepreneurship is to follow the development trend of the global economy and rely on the big health industry to achieve speed-up, cross-border integration, and innovative development."Big health is a sunshine industry after the IT industry,and all countries in the world are paying attention.In developed countries, the added value of the health industry accounts for more than 15% of GDP, while in my country, it only accounts for 4% to 5% of GDP.It is lower than many developing countries.At present, the annual income of China's health industry is about 90 billion U.S. dollars, while the output value of the U.S. health industry has exceeded 1 trillion U.S. dollars.According to the relevant economic survey data of the U.S.

Department of Commerce, the U.S. health industry is the fifth largest industry after manufacturing, service industry, finance and insurance, and real estate. It is also the industry with the fastest growth rate in the past decade, accounting for the proportion of GDP. 8.8%.The big health industry in the United States is different from that in China. Compared with the United States, China's big health industry is still in its infancy, and needs greater improvement and improvement in terms of industry segmentation and structural rationalization.The global market share of China's big health industry is getting bigger and bigger and its importance is getting stronger.In the past 3 to 5 years, China's big health industry may only account for less than 2% of the global market. In the past 10 years, the "BRIC" emerging markets dominated by China contributed only 6% of the absolute value of the global health industry. As of 2008, the "BRIC" emerging markets contributed nearly 30% .It is predicted that in the next few years, high-speed developing countries including the "BRIC countries" headed by China will still grow at a high speed, and such a growth rate will increase corresponding business opportunities.The health industry has become a global hotspot.After the steam engine triggered the "Mechanization Age" and later the "Electrification Age", "Computer Age" and "Information Network Age", the "Health Care Era" has arrived, and the health industry will also become the successor The global new economic focus after the IT industry.