You are here: Home » News » Black fungus information of effects and edible methods

Zhashui black fungus is the special product of Zhashui County, Shaanxi Province, and is a national geographical indication of agricultural products.

Black fungus, born on the side of the tree, looks like a human ear. Zhashui County is named for the abundance of oak trees, which are excellent mushrooms for the production of edible fungi such as black fungus and shiitake mushrooms. Zhashui black fungus is delicious, big and thick, rich in nutrients, and has high medicinal value. It is recognized as a health food by the outside world and is known as a mountain treasure. On December 24, 2010, the Ministry of Agriculture of the People's Republic of China approved the registration and protection of geographical indications of agricultural products for "Zhushui black fungus".

The surface of tussah black fungus is dark brown with a sense of brightness, and the back is dark gray. The water absorption rate can reach 15 times. 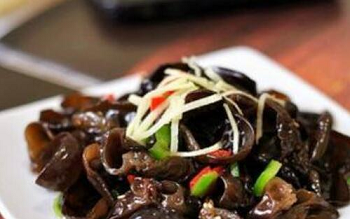 Fungus can replenish qi and blood, prevent obesity, promote gastrointestinal motility, cleanse the stomach, reduce blood viscosity, soften blood vessels, prevent thrombosis, prevent atherosclerosis and coronary heart disease, enhance immunity, prevent cancer and fight cancer . Black fungus contains iron, which can prevent and treat iron-deficiency anemia; it can prevent obesity and promote gastrointestinal motility; eating fungus regularly can promote the excretion of fatty food in the intestine and reduce the absorption of fat in food; eating fungus can leave residues in the human digestive system. The dust and impurities inside are absorbed and discharged from the body. It can also reduce the viscosity of the blood, soften the blood vessels, make the blood flow unobstructed, and reduce the occurrence of cardiovascular diseases. It contains anti-tumor active substances, which can enhance the body's immunity. Anti-cancer anti-cancer.

Many people like to eat fungus, but after buying black fungus, they don’t know how to deal with it.

1. Prepare a pot of water

2. Grab a handful of fungus with your hand, a handful is a plate. Soak the black fungus into the water for about 15 minutes.

4. Put water in the pot, pour the washed fungus into the water, cook for two or three minutes and remove.

5. At this time, the processed fungus can be further processed, such as scrambled eggs with fungus, fried meat with fungus, and cold fungus.

• The black fungus is eaten and soaked now. It cannot be eaten after soaking for more than 24 hours.

Dried fungus can be made into cold dishes, classic dishes, old vinegar fungus is made of dried fungus, it is necessary to soak the dried fungus in advance during the production time, and then cook it in boiling water for 2 to 3 minutes. Cool in cold water, then add shredded green onion and shredded cucumber, then add soy sauce, oyster sauce, balsamic vinegar, sesame oil and other seasonings, mix thoroughly and serve on a plate.

Dried fungus can also be used to scramble eggs. Before frying, it is necessary to soak the dried fungus, do not wash it, and then open the egg shell in a bowl to make egg liquid, put oil in the wok, first Put the eggs into the pot and fry them into lumps, take out and start the pot again, put in an appropriate amount of chopped green onion and stir-fry until fragrant, then stir in the fungus and stir-fry until cooked, add salt to taste, and at the end add the eggs and stir well.

Dried fungus can also be fried and eaten together with yam. During the cooking time, it is necessary to peel the dried yam and cut it into pieces. Then soak the fungus in advance, tear it into small pieces, put oil in the frying pan and heat it up. Sauté chopped green onion until fragrant, put the yam into the pot and stir well, then put in the treated dried fungus. After frying, add salt and chicken essence to taste, and it can be eaten after frying.